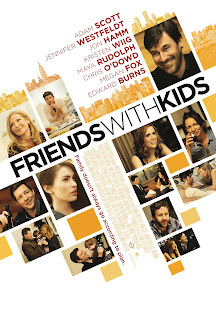 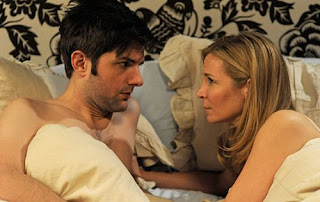 If a romantic-comedy can't reinvent the wheel, why not just write characters that are intelligent and worthy of our time? Why not just raise the emotional stakes to a relationship we can care about? Well, darn it, that's exactly what Jennifer Westfeldt does with her grown-up dramatic comedy about child rearing and thirty-something relationships. Like Nia Vardalos with "My Big Fat Greek Wedding," Jennifer Westfeldt made an unexpected splash with her first feature screenplay, the small, utterly charming 2001 indie hit "Kissing Jessica Stein" (where Westfeldt, starring as Jessica Stein, gave girls a try). Now, on her third but second solo script, writer-director-producer-star Westfeldt pulls quadruple duty and makes her directorial debut with "Friends with Kids." 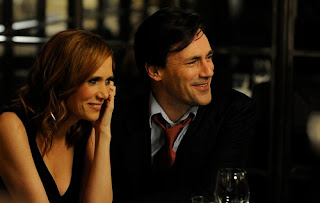 Julie (Westfeldt) and Jason (Adam Scott) are single best friends since college, living in the same Manhattan apartment building but on separate floors. They can always count on the other to answer the phone and just chat, while they both have random hookups lying in bed next to them. Getting together for dinner with their close-knit circle of friends, Julie and Jason, as well as oversexed couple Ben and Missy (Jon Hamm and Kristen Wiig), are presented with exciting news by marrieds Leslie and Alex (Maya Rudolph and Chris O'Dowd): they're having a baby! Four years later, both sets of friends (except the two J's) have their hands so tied with kids that there's rarely any time for much romance. Once they get talking about both wanting kids someday, Julie and Jason decide to have one together, out of wedlock and without being in a romantic relationship. Their friends don't think it's such a hot idea, but Julie and Jason beat the system and choose to conceive the old-fashioned way. Cross your fingers and hope they can make it work without any romance.

From a pretty progressive premise, Westfeldt's film poses the question of whether or not platonic friends can commit to having a baby but not as lovers. There aren't any contrived sitcomplications or big laughs, just small insights and real, sharply funny conversations. (Okay, there is one sight gag involving baby poop, but it's funny and not played in a juvenile, disgusting fashion.) There's one particularly cutting moment of truth when the friends travel with their kids, and Julie and Jason bring their respective significant others, for a New Year's ski trip in Vermont. It happens over dinner as the conversation becomes painfully uncomfortable, resounding with candor that's unseen in most contemporary motion pictures.

With astute albeit modest results, Westfeldt blends smart, natural humor and authentic drama in "Friends with Kids." It's her glossiest and most mass-market film to date, especially with the mini-reunion of "Bridesmaids" alums Wiig, Rudolph, Hamm, and O'Dowd as co-stars, but straddles the independent mind of a real filmmaker. Her direction is light and unforced, and cinematographer William Rexer lends the overused N.Y. setting setting a golden summery glow. Instead of using Billboard's hottest hits, Marcelo Zarvos's easy-listening music score is interspersed with songs by the indie rock band, The 88. 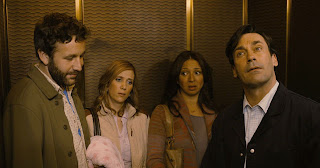 Everyone feels like an actual person, and it doesn't hurt that they're well-drawn and likable. In the role of Julie, Westfeldt (who keeps resembling Joan Allen with age) has a warmth and honesty without the vanity of some actresses. Her Julie is strong-minded but insecure and a little neurotic. Scott gets his chance to be a leading man. His Jason is funny and attractive to be taken seriously as somewhat of a ladies' man, but never sleazy. Rudolph and O'Dowd (who masks his Irish accent this time) are fully convincing together and individually as Leslie and Alex. They have two kids and may only have sex once a month, but make it work. Wiig and Hamm (Westfeldt's real-life partner) do a complete 180 from their "Bridesmaids" booty-call couple as Missy and Ben, who aren't as happy as they thought they were, their adventurous sex life becoming quite rare. They prove how underutilized they are in the film industry, proving their versatility in comedic and dramatic work. Edward Burns is charming as usual, here playing Julie's new boyfriend Kurt. And who would have thunk it, but Megan Fox gives her most life-like performance as MJ, a hot Broadway actress that Jason starts dating but doesn't have "having kids" on her list of future plans. 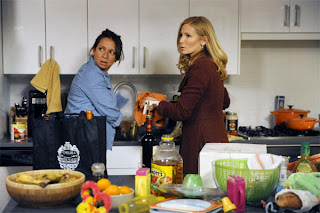 As of late, it's fast becoming a cliché to see movies about platonic friends deciding to have casual, emotion-less sex, until the big "L-O-V-E" comes in and makes things more complicated. Here, Westfeldt doesn't manufacture a Fake Break-up. We believe Julie and Jason are just friends and can have separate relationships, until their emotional connection with one another becomes all too confusing to handle. The actual scene of two friends making a baby gets the human interaction right, showing the awkward stalling and hestitation between Julie and Jason. So for a long time, the assertion that men and women can just be friends with a baby feels like it could really work.

On Westfeldt's watch, "Friends with Kids" doesn't strictly abide by romantic-comedy conventions and keeps predictability at bay, until caving in at the very end. At least it comes with one of the funniest, dirtiest love-declaration lines, which is more guttural and candid than "You had me at hello" but just as quotable. But before the inevitable destination, it still unfolds less easily than you'd expect from a creativity-starved genre. Also, Julie and Jason have a connection as best friends rather than just being two polar opposites that once hated each other. If she continues her solid track record, Ms. Westfeldt has permission to make all the romantic comedies she wants.