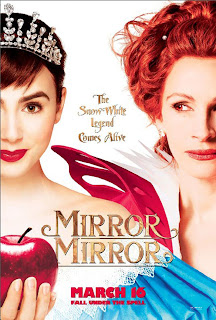 Mirror Mirror (2012)
106 min., rated PG.
Grade: C
Hollywood sure likes its fairy tales, what with TV shows "Once Upon a Time" and "Grimm" and not one but two takes on the "Snow White" tale being released this year, let alone three months apart. "Mirror Mirror" is the first wrinkle on the dark Brothers Grimm fairy tale, decidedly more cheerful and all-ages friendly but not completely the eye-rollingly hammy, pandering disaster suggested by its dreadful marketing. With director Tarsem Singh in command (pulling a McG and going just by "Tarsem" in the credits), this half-earnest, half-jokey retelling is an opulent feast for the eyes, which is great because everything else is pretty flat and often wackily unfunny. 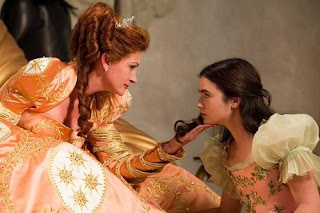 From the beginning, The Queen (Julia Roberts) narrates, clarifying that this is her story, not Snow White's. She makes a few mocking asides, commenting that her stepdaughter's parents named her Snow White because it was "the most pretentious name they could come up with" and that the unemployed townspeople waste their time singing and dancing all day. After the mister supposedly goes missing in the woods and the Queen is left to rule the kingdom, Snow (Lily Collins, daughter of Phil) is cooped up in her room while her wicked, vain stepmother sucks tax money from the town's peasants so she can have lavish parties downstairs. When the Queen orders Snow to be taken into the woods and killed on her 18th birthday, she's set free instead and found by the seven dwarfs (all played by some real, great little people). Meanwhile, Prince Alcot (Armie Hammer) finds his way into the Queen's castle and he's so handsome that she wants to marry him, so all of her money troubles will be over.

"Mirror Mirror" is not a totally arch fractured fairy tale like the original "Shrek," the delightfully campy gem "Ella Enchanted," or even the hugely enchanting "Enchanted." In fact, this beauty could've used a bit more bite, snark, or something. As expected with director Singh's visual flair and surrealist eye since 2000's staggeringly trippy "The Cell," the costumes, sets, and overall production design sure are bright and magical. (The Queen's wedding actually looks like the garish, campy Capitol in "The Hunger Games.") Otherwise, his pacing is oddly inert and the jokes rarely fall into a rhythm that works. 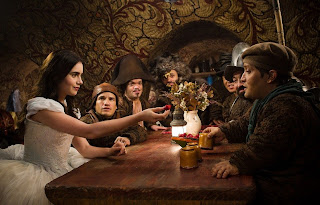 The film sticks to the basic framework of the tale while tweaking it here and there with quirks of its own. Instead of merry, mine-working dwarves whistling while they work and sporting cute names, the seven little men are bandits on stilts made of accordian pantaloons. There's no Sneezy, Grumpy, etc., but instead we get names like Grub and Grimm. One likes to eat a lot, and another has a crush on Snow. Also, rather than making Snow clean house, they teach her out to fight like a swashbuckling warrior princess, so that must be a female-empowerment spin. The Queen's beauty makeover, from the help of bird poop, bees, maggots, and snakes, is a weird, devilish touch. There's also a beast (which looks like a dragon-reindeer hybrid) lurking in the woods, and a surprise comes of that. Most refreshing is the handling of the "poisoned apple."

Melissa Wallack and Jason Keller's script tosses out a couple meta, anachronistic throwaway lines, "It's time to change the ending," and another about focus groups, which are clever enough but tacked-on to what's come before. The screenwriters don't really explain the other world the Queen enters when she goes through her mirror (floating up from the water, onto a bridge, and into a hut where a black-magic twin version of herself reflects in the mirrors). Oddly enough, the Queen's double looks like Dr. Jekyll's servant that Roberts played in "Mary Reilly."

Roberts is such a recognizable movie star that whatever role she's cast in, it's still Julia Roberts with her wide smile and infectious cackle. Luckily, given her first truly villainous role, she has cheeky fun with it and gets in some cartoonishly cruel wisecracks.

Collins, daughter of Phil, has a sweet, bewitching Audrey Hepburn quality about her (and check out those dark, monstrous eyebrows), but she's a blank screen presence. That is until she leads an enjoyable Bollywood dance number to "I Believe" across the end credits. Outside of that, Collins mostly just hits her mark and says her lines with a polite blandness. 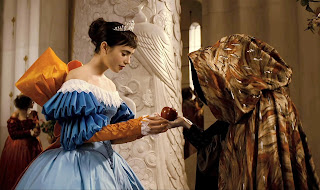 Hammer is perfectly dashing as a Prince Charming and game enough to look goofy, something Brendan Fraser used to be able to do. His hairy naked chest appears quite often as a joke and his white tooth even sparkles at one point. At one point, he's given a "puppy love" potion to drink, turning him into…a puppy. Licking Roberts on the face and asking to have his belly rubbed is momentarily amusing, especially to see the strapping actor get loose, but the joke plays itself out.

Nathan Lane, as the Queen's faithful and much-abused servant Brighton, provides some of the funnier gags with his perfect comic timing. Mare Winningham is also nice to see as a baker woman who has taken a liking to Snow since she young.

Previous "Snow White" tellings range from the bloody-fun and grim "Snow White: A Tale of Terror" to the Amanda Bynes teen modernization "Sydney White." "Mirror Mirror" at least exceeds negative preconceived notions; it's kind of fun and kind of charming, but despite being pretty to look at, it's also pretty dull. Like a reflection of celebrities wearing designers, this movie wears Tarsem. The Justin Bieber generation might enjoy it, but the animated Disney classic, "Snow White and the Seven Dwarfs," from 1937 remains the standard. Hopefully "Snow White and the Huntsman" is the fairest one of all.