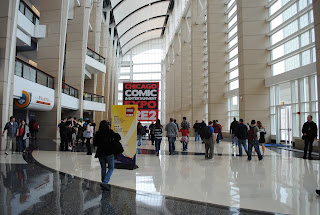 Hey everyone. Sorry I'm posting this kind of late, but much like my sex life, it's better late than never, right? (Where would I be without self-deprecating humor?)

C2E2 Day One: Where am I? Where is everything? Why is Batwoman so fat?

When I woke early on Friday morning, I was still innocent to the insanity that awaited me. But first, I wanted to find some food. There must be a grocery store, a deli--hell--even a CVS nearby, my naive brain thought. I walked two blocks in each direction from the convention center with nothing as much as a McDonalds and rows upon rows of swanky apartment buildings.

Defeated, I returned to my apartment, changed into my snazzy yellow crew tee and wandered around the convention center (incognito, mind you. I had a cardigan on). Thank god there was a Starbucks outside the show floor. Iced coffee was my best friend that--and every--weekend.

I started my shift at around noon. As I mentioned in my earlier post, I worked in the Artist Alley, which is essentially a sea of long tables where comic book artists, writers, illustrators, etc. set up shop. It's all a wonderful chaos. Not as busy as I expected (just wait till Saturday) but still crowds and crowds of people. I was a bit flustered walking the aisles, noticing the names of some of my favorite writers (Gail Simone, Scott Snyder) and artists (Dennis Calero, JK Woodward). Whenever I meet someone even remotely famous, my brain turns into fanboy mush. All my preconceived phrases morph into an endless string of "I luv your werkk. You are sew kewlllll."

So, I break for lunch, and downstairs from the show floor is a McDonalds and a place called Connie's Pizza. You guys, I totally ate at the golden fucking arches. AND I HATE MYSELF FOR ENJOYING EVERY PROCESSED BITE.
Most of the day is a bit of a blur. I do recall seeing an abundance of girls dressed up as Batwoman. Fat girls, mind you. Noticeably fat, not just slightly chubby. And I'm not saying that I hate fat girls, far from it. It just surprised me that they all thought to dress up as Batwoman, a lesbian icon and supreme badass. Huh, maybe I just answered my own quandary? GET IT GRRRLS

As for the guys, I saw many a version of Wolverine, but the real star of the show that day was Deadpool. One of which had such a perfect spandexed ass, it made me want to do a slow clap in his honor. But, I was working and had to be professional. Sigh...

When the day is over, my lower back throbbed, my feet pulsated with fiery pain (even with a decent pair of gel inserts), I also wafted through so many troubling odors and I could not wait to crawl into my hotel bed.

Something odd came over me as I crashed for the night, a feeling--or maybe a longing--that I couldn't wait to get up and do it all over again in the morning.

My shift started early Saturday morning. Not really sure why we had to be there at 7:30am when the show floor didn't even open until 10, but I decided to shut up, because I was getting paid for it. It's during this early morning walkthrough that I met one of my favorite artists: Dennis Calero.

Dennis had a decent run on Marvel Comic's X-Factor, a kind of noir spin-off of the core X-Men titles. His art complimented writer Peter David's stories beautifully, with a moody, dark aesthetic. He was very nice, if not a bit aloof. But I'm not sure if that was because of me acting like a total starstruck moron. Plus he was cute, so that didn't help.

Much of Saturday consisted of me standing around, ushering people in lines. I helped out Tim Sale (best known for Batman: The Long Halloween and doing illustrations on the sounded-awesome-on-paper series, Heroes), whose fans were patient enough to stand and wait for him.

After more walking around, I clocked out and did some show floor shopping. Plugs for various companies in 3...2...1...

I first stopped at the Threadless booth. Threadless is one of those companies that I've always liked, but never actually bought anything from, much like WeLoveFine, the next stop on my shopping spree. I also bought some stuff from the lovely people at Prism Comics. Seriously, I love what they do to help GLBT artists and writers. For instance, I met the adooooorable Jay Fuller, creator of the webcomic The Boy in Pink Earmuffs. I also got introduced to Rick Worley's A Waste of Time, a webcomic that, at times, seemed to peer into my own thoughts for its ideas on sex and relationships.

Oh, and I also met Tony Akins, the inker on the lamentably canceled Jack of Fables, one of my favorite comics of all time. And I bought a super-secret item for my roommate (I won't say what it is, in case she reads this) All that, and I had time to grab lunch at the aforementioned Connie's Pizza. Not actually that terrible (how's that for a plug, Connie!).

Let's see, what happened after that? I went back to work, walking the aisles, keeping the peace or whatever. Did I help out with another line, possibly Art Balthazar's? Or was that Sunday? Oh, god, I think I'm losing my mind!

As you can probably guess, after my shift I ran and jumped headlong into my hotel bed, where I remained till the following morning....kids' day...god help me...

Sunday was Kids' Day at C2E2, something that didn't exactly fill my heart with joy. I don't interact with children that well in the best of conditions. But let me tell you, those damn C2E2 kids were adorable and surprisingly well-behaved. And the adorable costumes! Little versions of Flash, Thor, Wonder Woman, Supergirl, etc.

I was also out of it all day, and I'll tell you why. It was the last day of C2E2, I was wired on caffeine, there were little children scampering around my feet all day, and then a kid passed out in the middle of the Artist Alley.

So, here's the deal. The boy was passed out, barely responsive, his mother and one of the Artist Alley folks were crouched next to him. Now, it's not like I performed CPR or anything, but I was the first employee on the scene (thanks to the wonderful Artist Alley patrons who gave me the initial heads-up), and I immediately found my supervisor, who in turn called the EMTs. I was humble about my role in helping the poor kid (who was fine, by the way), but everyone else insisted I was a hero. Yeah, so that happened.

The rest of the day was spent ushering people in Art Baltazar's line. Don't know who that is? Well you should. Not only is he a fantastic artist, but he's a great guy. His line ran all day long, and he loved every minute of it. I must say, every line I worked on that weekend was a pleasant experience. Con-goers are a patient lot. Everyone I talked to had a great attitude about standing in line for hours on end. I'm sure there were some assholes there, but I didn't encounter any. I forgot to mention Art stayed after the show floor was closed to see everyone in his line and give them a sketch. I was going to ask for one, but, again, my anxiety about stuff like that got the better of me. Also, another cute comic book artist. Jesus.

After the day was done, all of us C2E2 Crew members gathered in the lounge for a post-Con afterparty type thing. There was a lot of cheering, a few speeches, and, for me, a sense of melancholy. It was an unexpected feeling, since I hadn't really felt that connected to anyone (save for a few people) during the weekend. But there I was, surrounded by all my fellow yellow-shirts, with a heavy sensation in my chest. I think I hid it well, but man, did I feel like breaking down.

I guess this is the part in the article where I say something really mushy and corny and cliche about what I learned or the friendships I made or the moral I got from it all. Here goes: the C2E2 experience was one of the best things I've ever done. I met some truly awesome people and had an exhausting, wonderful time. There, that's about as mushy as this guy gets. 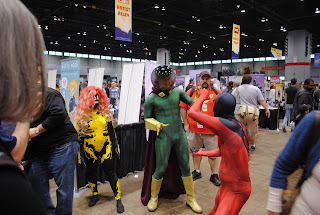 See you assholes next time!