Titanic vs. The Titanic 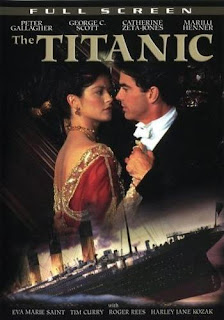 Titanic vs. The Titanic

To begin with ease, Peter Gallagher is the man. If that is the first statement one must either be discussing “The OC” or “The Titanic.” The other Titanic.

In a miniseries I saw on CBS, Catherine Zeta Jones and Peter Gallagher got to take stabs at playing one of the most talked about subjects of the late 90’s. Much like the work of James Cameron, this film did it’s best to capture the story of a lonely woman in a bittersweet sugar-coated world seeking romance that is more indulging than Hostess.

There is first class romance.
Tim Curry shows up.
Then, there is also a third class or steerage romance between a young and common thief and a girl who threw her night clothes in the ocean. Wait, wtf? No shit. It’s real.

This version of “The Titanic” was entertaining to watch. In fact, it captured the luxurious essence of what the Titanic was about, such as the crystalline nature of formal early 20th century life.

However, what this film did not capture was the sensuality of James Cameron. For example, every character in James Cameron’s Titanic was able to pull you in with an intense dramatic nature (sappy much?) Catherine Zeta Jones’ version instead had too many wallflowers in the background and wasn’t able to bring the message of unity to the people engulfed in tragedy.