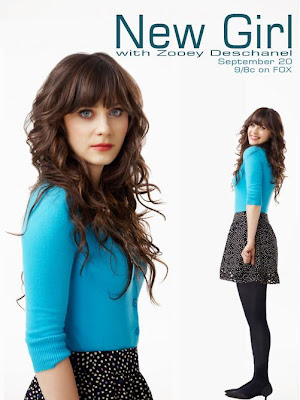 
New Girl is easily my favorite new show of the year.  Yes, yes, there’s Zooey Deschanel.  Zooey with the enormous eyes and the voice that alternates between gruff/sexy and something that makes you want to yell at her to clear out her throat.  Yes, we all love Zooey, and her character Jess, who are basically the same person.

The other characters on New Girl are solid, too.  Schmidt is a hilarious, genuinely-sweet-but-has-trouble-keeping-it-in-his-pants cheeseball.  Nick is, in my opinion, the one Jess will eventually end up with when she realizes that he’s all she ever wanted: smart but lazy, just looking for someone who will be nice to him.  And then there’s Winston, who’s little more than the family pet, but he offers decent comic relief when everyone else is moping.

The idea behind New Girl, of course, is to develop a strong female character (Zooey/Jess—Jooey?  Okay, I apologize for that one) who’s just a little bit different.  As the SNL skit puts it, “This is ‘Bein’ Quirky with Zooey Deschanel!’”  Watch Zooey talk about Nina Simone and vintage sweaters.  Watch Zooey bat her eyelashes and make references to old-time radio stars.  That’s what New Girl is all about.  There are thoroughly modern, otherwise normal women out there who are into these things, and on New Girl, Jess makes it all okay.

Yet for all of her quirks, Jess still comes off as more normal and successful than the rest of us.  She has a steady job as a teacher and really beautiful hair.  Her best friend is an L.A. model, for god’s sake.   Jess looks great in even the weirdest lingerie (see her awkward attempt to seduce her new boyfriend Paul in episode 8).  She may listen to old Joni Mitchell songs after a breakup (episode 23) and salvage antique armoires from the garbage (episode 16), but she still manages to lock down hot winners like Russell, the rich father of one of her students.

Okay, so this is a TV show, and interesting things need to happen on TV in order for people to watch, and it helps if the TV shows’ stars are attractive.  And—once again—I love New Girl, for its charm and hilarity and occasional sweetness.

It’s just that, when New Girl comes on every Tuesday night and Fox puts up its “Fan of the Week,” and a cheesy male voice says something like “Congratulations, Abbie!  You’re simply a-DORK-able!”, I am disinclined to believe that we are supposed to be watching a show about dorks.

Fox, if you really want to make a show about a girl the weirdos among us can relate to, here are some qualities that she should maybe have:

Cellulite.  Perfect bodies are, like, so mainstream.
For that matter, actresses like Melissa McCarthy and Gabourey Sidibe have already established the plus-sized woman as a totally legitimate character in Hollywood.  Time for some solidly average-sized women.  They don’t have to be comfortable in their own skin; awkwardness and a lack of self-confidence is the name of the game here, after all.  I’m just saying, it’s not much fun watching a thin, perfectly proportioned woman get worried about her appearance when clearly, the rest of us wish we looked just like her.

A few moments of substantial clumsiness that last for more than one episode.  Take a lesson from the original dork: Anne of Green Gables.  (Not just because Anne really did some stupid, thoughtless, yet endearing things, but also because modern-day dorks probably know and love Anne as much as I do.)  Anne died her red hair black, which turned it a disgusting green color.  She got her best friend totally drunk on cordial wine when they were twelve or so.  She threw fits and got herself in trouble and was generally a wreck a lot of the time.  And people still love her today.  See, Fox?  Being dorky doesn’t have to mean shooting yourself in the foot, popularity-wise.

A sustained interest in something a little offbeat, but that requires substantial work and concentration.  The dorks of the world aren’t dorks because they want to be dorky.  They probably just became that way because they spent a lot of time learning how to do hand embroidery or studying physics or making homemade candy.  They aren’t necessarily geniuses, but they sincerely care about things that make other people wrinkle up their faces like badgers.

So, those are just some ideas, Fox.
Give me a call if you want to know more.