MOVIE REVIEW: Kitschy "Rock of Ages" nothin' but a good time with a half-naked Tom Cruise

"Rock of Ages" may be something of a mess, its flimsy, cliché-ridden story just a clothesline to hang rockin' power ballads and pop-metal hits, but it's a slick, campy, entertaining mess. Directed and choreographed by Adam Shankman (who helmed 2007's bouncy, vastly entertaining Broadway-based confection "Hairspray"), this big-screen adaptation of the 2009 Tony-nominated Broadway jukebox musical crams in more than a dozen classic rock-hit covers from the 1980s—and plenty of big-haired kitsch—that it's hard to resist. It may not achieve all-out camp like "Xanadu," but just when you thought nobody could just burst into song for no reason anymore, this film disproves that. For all its cheerful, brassy high energy, "Rock of Ages" is nothin' but a good time. 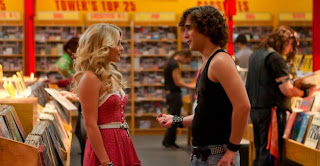 It's 1987 on Los Angeles' Sunset Strip, where Oklahoma dreamer Sherrie (Julianne Hough) has just gotten off the bus in hope of making it in the City of Angels. Immediately, she meets a cute barback named Drew (Diego Boneta), who has rock star dreams but crippling stage fright, and he gets her a waitress job at the Bourbon Room. The Whisky a Go Go-style club's owner Dennis Dupree (Alec Baldwin) and his right-hand man Lonny (Russell Brand) feel the distress of a financial crisis, but after a call from sleazy manager Paul Gill (Paul Giamatti), a one-night gig performed by beer-swilling rock god Stacee Jaxx (Tom Cruise), the frontman of the band Arsenal who's breaking away to go solo, might just keep them open. Since Jaxx is such a hard-partying, unreliable nightmare, the mayor's rigid, picketing wife Patricia Whitmore (Catherine Zeta-Jones) hopes to boycott Jaxx and put an end to "satanic" rock 'n' roll.

The good thing about a musical made up entirely of popular, recognizable rock songs, not originals, is that you can count on all of them to be catchy. But then, like every rose has its thorn, musicals have to accommodate all the songs with a narrative. Narrative might be "Rock of Ages'" biggest downfall, as it sometimes feels like four different movies squashed into one. The subplots are transparent with contrived conflicts and the characters are all paper-thin types, and the three-man script, written by Justin Theroux, Chris D'Arienzo, and Allan Loeb from playwright D'Arienzo's book, does a lot of cramming. The film spends so much time on the girl dreamer-meets-boy dreamer storyline that it loses track of the others. The needless Patricia Whitmore character, an addition not from the show, is introduced early on, but by the next time she re-appears, one nearly forgets she was ever there. 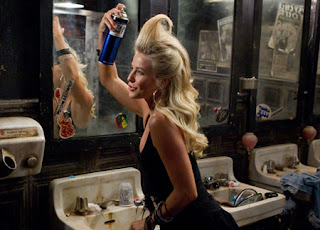 So much for narrative cohesion, but "Rock of Ages" is exuberant enough to forgive the overlong, inconsequential script. Even as you see pieces of "Showgirls," "Burlesque," and every other girl-moves-to-city-to-make-it film stitched together, there are over a dozen covers from the likes of Night Ranger, Journey, Foreigner, Def Leppard, Bon Jovi, Guns N' Roses, Pat Benatar, Twisted Sister, Poison, Europe, and REO Speedwagon. (Ironically, "Rock of Ages" does not include the title song by Def Leppard, although the Adam Sandler comedy out this weekend, "That's My Boy," does.) The tried-and-true songs comment on the meandering storylines as closely as they can, but are mostly sung to deliver a crooning good time. A "Sister Christian"/"Just Like Paradise"/"Nothin' but a Good Time" mash-up on a bus to the Sunset Strip sets up the plot in a spirited, shamelessly goofy opening (complete with a singing bus driver and passengers). There's a clever combination of Starship's "We Built This City" and Twisted Sister's "We're Not Gonna Take It," with the rockers on one end and the picketers on the other, with '80s icons Sebastian Bach and Debbie Gibson seen in the crowd. And the whole ensemble closes out on Journey's biggest hit, "Don't Stop Believin'," which is played off as Drew's song written about and for Sherrie (because Sherrie is a small-town girl that took the midnight train, get it?). But the deliberate '80s gleam and cheese of it all is fun.

The party of actors is having such a ball, doing their own warbling, that their enthusiasm is outright infectious. Buoying a bland story, Julianne Hough (destined for star status after her sexy, charismatic debut in last year's "Footloose" remake) and Diego Boneta are adorable, likable, and very earnest as young lovers. She gets to sport the Farrah Fawcett 'do and showcase some nice vocals, while he bears the look of an aspiring rocker and can carry a tune the best. Their rendition of Foreigner's "Waiting For A Girl Like You" and a mash-up of Extreme's "More Than Words" with Warrant's "Heaven" are like celebrations of Sherrie and Drew's blossoming love. Alec Baldwin in a bad wig is amusing in itself and he makes the most of the Bourbon Room owner, as does Russell Brand, who plays to type but with bigger hair. These two highjack all of the script's intentionally funny dialogue, matched with their ace delivery (one involving how Michael Jackson has been looking pale). The crowds will titter when Baldwin and Brand share a bromantic serenade of REO Speedwagon's "Can't Fight This Feeling," taking their subplot into an unexpectedly sweet direction that both performers play with silly commitment. It needs to be seen to be believed. 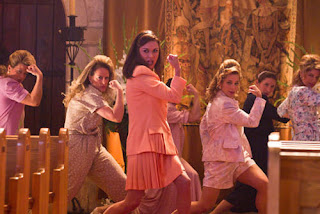 Catherine Zeta-Jones is game to have fun and works her laser eyes as this tight-assed, Tipper Gore-esque caricature, but the real motivation behind her madness isn't hard to figure out before it's revealed. At least she gets to carry an energetic anthem with her group of square, John Waters-y church ladies of Pat Benatar's "Hit Me with Your Best Shot," performing choreography with gusto and in heels that paid off since "Chicago." It's too bad some of director Shankman's staging is a little hinky and strained, the church-set number being intercut with Bryan Cranston, thanklessly cast as her mayor husband, partaking in S&M shenanigans with his naughty, role-playing mistress. Naturally, the cast member with the most soulful, powerful pipes of all is Grammy-winning singer Mary J. Blige as Justice, Sherrie's pick-me-up "fairy godmother" and owner of the Venus Club for Gentleman, even if there's no real character to speak of. When she takes Sherrie in and introduces her to the strip club, she breaks out into Journey's "Any Way You Want It," and it's a splashy, alive sequence. 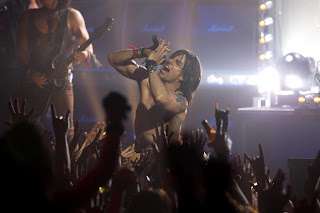 Bandanna'd and exhibiting not an ounce of flab on his tattooed torso, Tom Cruise easily steals this thing as the washed-up, half-naked, Axl Rose-like Stacee Jaxx who seems to live in his own universe. (Jaxx is also accompanied by his mischievous pet baboon named Hey Man, played by Mickey, who's good for a few laughs.) Being the rock star of movie stars himself, he rocks this role as the film's best commodity. Since his last outrageous, gimmicky turn in 2008's "Tropic Thunder" in a fat suit and bald cap, Cruise just goes for it again, and it's a louche, sexy, weirdly hilarious hoot of a performance. There are a lot of nonverbal shots of Cruise just preening, and you believe him as a rock god when he belts out "Pour Some Sugar on Me," as well as "Wanted Dead or Alive" when expressing his broken heart and loneliness even as a rock star. Best of all is Cruise's goofily over-the-top, heated tryst to Foreigner's "I Want to Know What Love Is," where he's well-paired with Malin Akerman, playing nerdy-sexy Rolling Stone reporter Constance Sack who's trying to expose Jaxx but gets caught up in his seduction. Frenching like they're members of KISS and Cruise singing directly into Akerman's bum, both actors play the scene with their tongues firmly in cheek.

Some of the numbers aren't always helped by Emma E. Hickox's rhythmless, cut-happy editing and others could've been snipped altogether to advance the story faster. Still, by the time you walk out of "Rock of Ages," you won't be able to get "Any Way You Want It" out of your head. And if you thought Journey's "Don't Stop Believin'" was dead from oversaturation ("Glee," "The Sopranos," and college karaoke bars), guess again. Even if the 126-minute film wasn't kidding about the Journey hit's own lyrics ("the movie never ends…it goes on and on and on and on"), "Rock of Ages" has such upbeat, eager-to-please vibes that you'll come out a believer. You can try not tapping your toe and singing along, but you'll fail. Who said rock was dead?