My Not Epic Fiona Apple Review

First of all, I'm very glad Fiona Apple exists. And is still making albums, although this might be her last for a long time. Who knows? It's anyone's call at this point. I can see her just like, being like "this is it. I don't want to deal with you all anymore." and walking away. Hell, I WOULD WALK AWAY.

I still remember being much younger and more precocious and going to scoop Extraordinary Machine up after work (at, uh, McDonald's). And it was one of the best decisions I ever made; many a bus ride was spent jamming out to that CD (yes).

"Be kind to me or treat me mean. I'll make the most of it, I'm an extraordinary machine."

For a while, it was a mantra. And I would love to say that's irrelevant now, but it's as applicable as ever. The older I get, the more sensitive I seem to become. Apparently, all Fiona does is hide in her house and walk her dog at sunrise to avoid people. Give me a few more years and I'll be there.

I do not remember my introduction to Fiona Apple, but I do remember that I heard "Criminal" as a preteen and was like "what is this weird feeling in my vagina?" Then I saw the video and the weird feeling was 300000x more intense. It always will be. Goddammit Fiona Apple:  I want your hair and body. Anyway.

So what to make of her newest effort? That has been like, seven years in the making? Well it's brilliant. And I say that unbiasedly. Because I was a much crazier Tori Amos fan than I ever was a Fiona fan (cut from the same cloth? oh shut up, I was a depressed female teenager) and there was a certain point where I just had to do the decent thing with Tori and walk the (fuck) away.

Her relatively small discography has been smothered in layers of instrumentals; we don't have that with Idler Wheel. And I will just call it Idler Wheel because it's really a long title for me to remember. So YOU can remember that. On Idler Wheel, it's a lot more acoustic. Extraordinary Machine was largely ignored by most mainstream media; save those that wanted to give her career novelty and her fans, who organized "A Free Fiona" day for her and sent apples to Sony. Fact:  I was one of those fans. :/

The whole album is stark, jazzy and a bit dark. But not in a melancholic way:  it's more self aware. And it's more mature than her other efforts for sure, but her work always has been fairly mature from what I can deduce. Maybe not Tidal but others, definitely. Each album though:  she seems to become more painfully neurotic. And stark. Therein, she gives us weirdoes a voice. It's funny someone so reluctant of limelight has become the unofficial spokeswoman for so many. I hate to say it, but there are several instances where I winced at her lyrics. And am still wincing at them. "How can I ask anyone to love me when all I ask is to be left alone?" TRUTH, woman.

It's always interesting (to me at least) to imagine Fiona's romantic debacles in her songs. For example, I understand she dated David Blaine for a while, then Paul Thomas Anderson, and then um, Jonathan Ames, who gets a song on this album, oh haiiiiiiiiii. I read not too long ago (I have no sense of time anymore, I don't feel like time means anything anymore and I myself always ready for the end of things) that they were dating, and then they just kind of fizzled out or something. Whatever. "Jonathan" is great itself in thus you can see her and him enduring an awkward Coney Island date, and Coney Island is the most depressing amusement park on the face of the planet, so it would probably be even more awkward. Seriously. Fiona, btw, I found you a new man if you're interested.

Well- this album is pretty confessional, as in all are things in the world of Fiona. "I could liken you to a werewolf," she hisses in "Werewolf." And omg! "Liken" = "Lycken!" I see what she did there. Nice touch. But you know, she's cool with her break-ups:  "nothing wrong when a song ends in a minor key."

There is nothing wrong with that; it's human nature. And therein is a debate to whether or not Miss Apple is "crazy." Absolutely not:  she presents to us her emotions and life in a very objective way. It's easy to read into her lyrics and think she is giving us the whole depressed girl methodology, which is played to death at this point. Of course it's not a happy album; do not listen to Idler Wheel if you are madly in the throes of love. It's the antithesis of that; it's watching love depart and trying to take notes on why it did depart. Oh, was it you? Me? Most likely me. I live in my head most of the time. You and I both, Fiona. See you at group
therapy.

It's just brilliant though. And heartwrenching. When she's discarding instrumentals in favor of voices and basic percussions:  it's so much to the point, so close to the bone, so relatively raw. In the day and age where everything seems so electronic and inhuman, Fiona Apple gives us something as human as we can get.

"Hot Knife" is a stand-out, as everyone's been saying and I will echo, simply because it's a.) sexual and b.) comfortably, mature woman sexual. Not scantily-clad-teenage-girl-looking-somewhat-freaked-out sexual. It's more like- just a realization I suppose. "If I'm butter, I'm butter, I'm butter and he's a hot knife." Her sister, Maude Maggart (OMGISAWHERCABARETPLACEINLAANDWETMYSELF) chimes in on the chorus and the two of them sound closely, closely, closely alike. Parents must be proud. Hell, I would be, but I am not a parent. 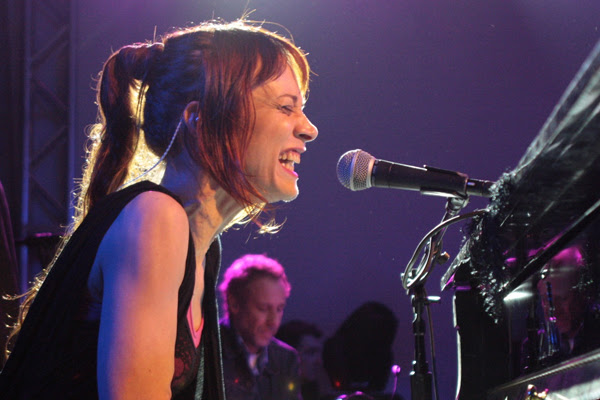 The best part of "Hot Knife" (for me at least) is when she gets towards the end and says, in an easygoing-cum-seductive whisper, "you can relax around me." The older we get, the more this is what we want. Relaxing around another human is near impossible, but it's nice to hear someone give that thought the moment it needs.

The only qualm I can say about Idler Wheel is the track "Regret." It's one hell of a bitter pill to take in. The rest? Pretty much near perfection. I say this as someone who has went through her Regina Spektor phase and lived.

The highest achievement of this album is by far "Valentine." I mean that to the extreme. Listen to it, hear the words:  a myriad of meanings are possible. Good to have you back, Fiona Apple, so good.

"I love you, you, you, you." She drones on in the song, and every time she says "you" it's this pained passion that you can't help but acknowledge from the pit of your gut:  she might as well be singing to her fans, who she has finally seemed to become comfortable with.

June 01, 2021
If you're even vaguely familiar with the Phoenix music scene to any extent, you probably knew Andy Warpigs. I saw them a few times at Yucca/Time Out Lounge when I was frequenting both spots a few years ago. Andy Warpigs was one of the most ubiquitous names you could come across, and with good reason - they were an incredibly prolific and talented artist, basically a Phoenix legend.  Unfortunately, over the weekend Andy Warpigs passed away - an extremely tragic loss. If you can possibly donate to the GoFundMe to help Andy's mom with funeral expenses , please do so.  Take care, Britt
Post a Comment
Read more