July 29, 2012
Okay, let's get back to the basics. I had designed this countdown in my head as being a gloss-over of the past decade in pop culture but I had included some recent events that were just earthshattering (literally) to NOT have been included. Did that sentence make sense? Who know; who cares!

Let's journey back to the mid-2000s now. When smartphones had yet to take over the world and facebook was just a dream in Mark Zuckerberg's oval-shaped head. 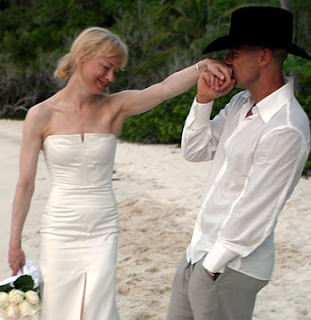 Oh I adore this picture for reasons I'm still not totally sure of. Look at those newlyweds! Look at her glow! Look at his ridiculous hat!

This one came of the blue, didn't it? No one even really seemed to know they were an item until much too late. And by then the unthinkable act had been carried out and Renee, supposedly, believed Kenny's tractor to be INDEED sexy.

Renee apparently became lucid when she woke up and saw who was next to her in her big bed in the Virgin Islands (Kenny Chesney). Likely she screamed and wanted their marriage to be revealed as what it kinda was- a fraud!

Other celebrity marriages that have lasted this little? The Kardashians, Britney Spears and her high school pal, I think we all know what you sign up for when you marry a Kardashian though...