Top 10 Reasons to Get Excited for the Olympics: #5 Beach Volleyball 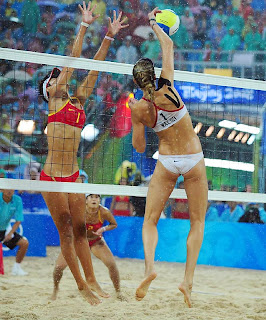 Top 10 Reasons to Get Excited for the Olympics: #5 Beach Volleyball

This is one sport that is by far one of the most entertaining in all of the Olympic games, yet aside from once every four years, it hardly gains major recognition. 2012 will be another year when Beach Volleyball will entertain the billions of Earth. Beach Volleyball is fast and intense, and makes for great television. Moreover, did anyone ever mention that there is an American sphere of Domination?
The American Women’s teams have dominated this sport since 1996, and no one has even come close.

Questions for You:
Is this the sport that has the least amount of clothing? I’d bet on it, and I guess that’s a major reason why we don’t see beach volleyball Gold medals from Saudi Arabia or the Sudan….(pause for laughter).

Xue Chen was ranked as the third sexiest Asian athlete by CNN International. I guess I’m not the only one that is in need of a giant woman in a bathing suit that likes kicking ass.