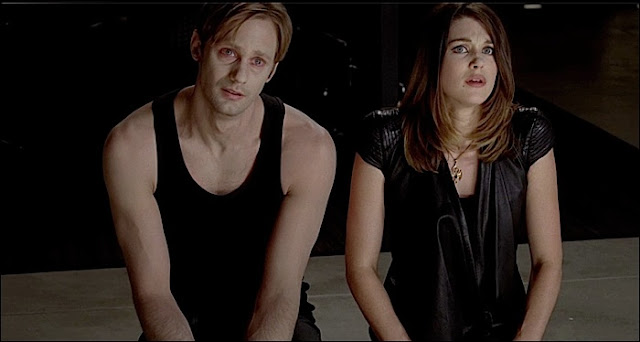 Episode 10: Gone, Gone, Gone
Last week, I hope for True Blood’s awesome streak to continue. In a way it did, but there were a few things that were decidedly less awesome. In this installment, we’ve got some vampire deaths, a shockingly sad goodbye, Lafayette being fabulous (as usual) and some more naked Sam. And a scene that had me LOLing so much I had to stop watching to compose myself.


Spellbound
Sookie’s watching the news in her pajamas (really ugly ones at that) and eating some Chinese when there’s a knock at the door. Who could it be? It’s Coroner Mike...for some reason. She lets him inside—a rookie mistake in this Tru Blood-less atmosphere—and he proceeds to bear his vampire fangs and bite her on the leg. Fortunately Sookie has some chopsticks handy, and stakes him.

Andy stops by to clean up the mess, and Sookie wonders who could have turned Mike into a vampire. I mean, it’s not like you know any bloodsuckers or are being hunted by one with a confusing name (Wharluex? Woorlow?).

The next morning, Jason’s at Sookie’s catching up about the Hoyt situation (see Jessica’s section for more on that). He also tells her that searching Bud’s house turned up nothing on their parents’ murder. Sookie’s frustrated that all Gran said was to check under the bed, but all it turned up were photos and “a bunch of other crap.”

Jason finds this odd and moves the bed, where he finds a hollow space under the floorboard. “Who’s the smart one now?” he quips, and I almost spit my iced coffee out my nose. Inside they find a scroll with lots of funny writing on it.

They take it to the local college (Bon Temps University? Did they not have a college until this point?) where a snarky professor tells them it’s not any identifiable language or code he’s ever seen.

Later that evening, Sookie and Jason drive back. And again, where were they? Was the college in another state? Maybe they went out to dinner with the professor. Anyhoo, Jason pulls Hoyt over along the way and tries to convince him to not move. Funny, I thought he'd be taking a bus to Alaska. But Hoyt’s glamouring sticks. Jason lets him go, then breaks the fuck down in the car. Poor guy.

And in “Why didn’t they just do this in the first place?” news, Sookie and Jason pay a visit to the faeries. Claude introduces them to Mirella, who is 500 years old and appears to be with child. She knows the scroll as a kind of ancient faerie pact. She deciphers it with here faerie sparkly powers and reveals it’s a pact between a Stackhouse ancestor and Werelo, Whoorlew, Woodrow—OMG is it vampire Woodrow Wilson, our 28th president? Warlo is apparently owed the first female fae born to the Stackhouse line. And guess what? It’s Sookie!

Think Twice Before You Go
It’s just a quiet night at Merlotte’s—on account of there being no Tru Blood and vampire attacks on the rise and whatnot—until Jessica shows up. Two hick townies try to shoot her, but she’s got friends. Sexy shifter and ghost whisperer friends. They kick the morons out just as Jason shows up.

So Hoyt’s alive. He meets up with Jessica and Jason at Merlotte’s. Turns out Hoyt got a job offer in Alaska (at least it's not Antarctica, right?). He wants Jessica to glamour him into forgetting both her and Jason. After some pained glances, she does. And I have to give it to the writers, they made me a little sad to see Jessica wipe Hoyt’s mind of his best friend and his first love.
When next we see Jess, she’s at home reminiscing about Hoyt when a bunch of Authority agents show up. They’re Bill’s security, and they’ve come to take her to dear old vampire daddy.

She gets there,and Bill gives her the tour. Jessica’s reactions to it all are spot on. Bill does his best at trying to sway her to his side. She plays along, like most of us do when stuck in an uncomfortable situation. You know what I’m talking about.

Never Get Out of These Blues Alive or Back Biters and Syndicators
So, they killed Molly. There, I said it. I mean, I knew she wasn’t a series regular, but this is the second awesome vampire that’s died—quite unceremoniously, by the way. Well, let’s hope Tina Majorino gets more work after this. Anyone else think she’d make an awesome Rachel Morgan?

Steve is stoked about seeing a live staking. Russell is still not a team player, and it pisses Salome off. So naturally I love it. Steve and Russell decide to go Greek for dinner. Which means slaughtering a frat house! As they dance to some awful Katy Perry song, Russell mentions a way they could walk in the daylight...

Bill and Nora meet with Eric, and force him to drink Lilith’s blood.
He and Nora have a vision of Godric, who tells them to fight Lilith. Then she shows up, rips Godric’s head off and bathes in his blood. And she’s still so very unimpressive.

Meanwhile, Sam and Luna are on the trail of Emma. They know Steve has her, but how to get to him? As Luna continues to become unhinged, Sam shows her an ad: Steve will be in New Orleans...

While Steve is debating David Finch (who you might remember as the closeted senator that had a fling with Lafayette), Sam and Luna skitter around as mice and find Steve’s dressing room. They shift back to human, if to remind us that at one time this show had so much more nudity. When they realize Emma’s not with him, they shift back into mice and climb into Steve’s briefcase.

Eric, meanwhile, seems to have been swayed by his hallucination. He gets down on his knees and forgives Russell for his transgressions against his Viking family. 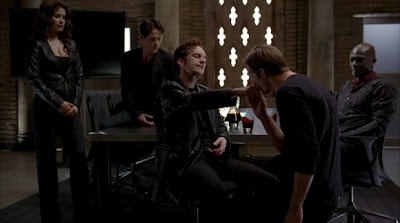 Steve gets back to the Authority to find out Emma’s turned back into her human form. He has no clue how to deal with a child. “Bad puppy!” It’s super-funny. Also, Sam and Luna are in there. Thanks for the lift, Steve!

In the council chambers, Russell gives his best “let’s go drink a bunch of faeries” speech. Salome is not impressed. “The day is forbidden,” she says. Russell checks her into a pillar, stands up on the table and says “Fuck y’all, I’m gonna eat me a faerie” and leaves. Bill and Eric seemed concerned for some reason. Do they know a sassy faerie waitress who can read minds? Oh, and Salome’s extensions survived, in case you were wondering.

Messin' With the Hook
At Fangtasia, the new sheriff is concerned about the lack of money the club is bringing in. It’s not their fault, Pam says. New sheriff (who looks a bit like Lestat from Queen of the Damned, don’t you think?) says that in addition to making more money, this area needs 30 new vampires to be born. If they don’t, then he’ll take all of Pam’s assets, including Tara.

Pam is pissed—to be fair, when is she not? She’s not about to let some “dickhead dipped in afterbirth” call the shots. She plans to run away with Tara and give up Fangtasia. Pam says the club holds no meaning to her, but Tara knows better.

As a character, Tara has always worked best under pressure. Take for instance her imprisonment by a vampire a few seasons ago. She calls up new sheriff when Pam is conveniently out, and tells him she might have just killed Ginger, the constantly put-upon barmaid. Ginger is sprawled across Pam’s desk, apparently dead. Tara gets him to check to see if she’s breathing, and Ginger stabs him with a silver knife. He recoils, spins around just in time to see Tara take his head off with a broadsword. Pam comes in and I’m not really sure what she said because I was laughing so hard at the sheer awesomeness of it all. Tara said something like “we’re not running.” And Ginger screams. Because she’s Ginger.
Favorite Moment: Just go up and reread that last chapter.
Least Favorite Moment: Andy and Holly had dinner. Yawn.
OMG Moment: Sadly, Molly dying. Let's just kill off all the cool characters. Wait, does that mean Tara is gonna die now that she's kind of enjoyable?