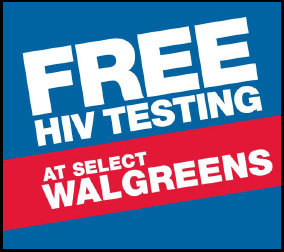 Today is a day to do something Useful.
But what can you do?

I got tested for HIV.

For all people, certain Walgreens around the country are now conducting HIV tests for free….and no, there are no hidden charges. It’s free.

I had to get tested for going overseas, and the doctors’ office has been nothing but bureaucratic hell, so thanks for the internet, I found that the Walgreens in Foggy Bottom DC as well as other select stores throughout the country can do the testing.

I walked in, and at first, I noticed that every single nation of Africa worked in the drugstore. The pharmacist was an angry Man from the Ivory Coast. His assistant was probably from Niger because she wasn’t talking much, and the woman who conducted my test was most definitely Ethiopian with a distant ancestor from Somalia.

Like I said, I was getting tested to go overseas.
They brought me back into a room, which looked like a closest with a chair, and the Ethiopian Somali woman handed me a short plastic stick that looked like a birthday candle with a tongue…(sorry for bad metaphors). I had to run it on the side of my cheeks for two minutes, and they placed it in a small vile. 20 minutes later, I was found HIV Negative...no surprised, but glad to know.

However, the point is…..HIV testing is available for free, and it only takes 20 minutes to get a result. I hope more people go for this.

Questions for You:
So how was your morning?