Surprise! It's Dexter! (a retrospective before the recapping of season 7) 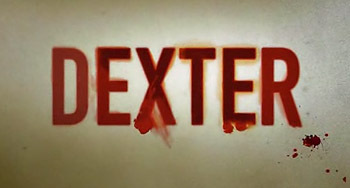 I didn’t watch Dexter when it first aired. I think I started watching the first season when season 4 was underway. It was one of those shows that everyone demanded I watch (sorry Sons of Anarchy and Breaking Bad, I’m sure I’ll get to you eventually). So I eventually gave in. I thought in anticipation of the new season--and since I'll be recapping it--I'd give myself a refresher, and let you all in on it. Needless to say here there be spoilers about the series as a whole.

So, we’re introduced to Dexter Morgan, a serial killer with a heart of gold.Or no heart whatsoever? 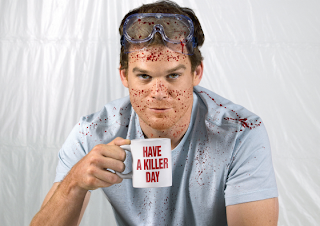 A heart that’s merely there for beating. Yes, that will do. He has a sister, Debra (Dexter was adopted, by the way) and they both work for Miami Metro PD. Dexter is a blood-splatter analyst. And Deb works in vice...Miami vice. Dexter has a girlfriend, Rita. There’s the supporting cast, all in varying levels of likability (Matsuda, Dexter’s ghost-dad) and annoyance (LaGuerta, Doakes, Batista).

Dexter kills other killers. He drugs them, wraps them in plastic (a la Laura Palmer), takes a slide of their blood (which he keeps behind his air conditioner). In this season, Dexter has no moral compass; he merely wants to keep up appearances.

The main villain is the Ice Truck Killer. A sassy gent who enjoys chopping up prostitutes and draining them of all their delicious blood. He also leaves strange “gifts” that have relevance to Dexter.

As the start of a recurring theme, Deb makes poor life choices every season. In this one, she almost marries the Ice Truck Killer. And they say gay marriage is ruining this country. What about serial killer marriages?

Overall: 9 severed hooker limbs out of 10

Season 2
This one was all about Dexter’s “dark passenger,” aka his desire to kill. Dexter’s kills are discovered (but he doesn't, naturally) and to cover up his real self, he agrees to go to Narcotics Anonymous at Rita’s behest (a result of Dexter framing Rita’s ex). There he meets Lila, one of the most enjoyably annoying and infuriating characters ever in the history of television (I mean, Dexter flies to France to murder her.)
I’m not sure there was a big villain in this season, this was all about Dexter indulging in his dark side and getting the cops off of his trail by orchestrating a spectacular frame-job. If there was a main villain, I don't recall.

Overall: 8 heavy British accents out of 10

Jimmy Smits guests as District Attorney Miguel Prado. He befriends Dexter, and they indulge in their dark sides.
Through some convoluted plot twists, Miguel discovers that Dexter is a vigilante serial killer. After Dexter takes Miguel on a kill, he discovers that his newfound friend is far more unhinged than he thought.

In a continuing theme of just stellar life decisions, Debra starts an affair with a confidential informant of her new partner, Detective Jackass—er, Quinn. She also works her way up from vice to earn her detective badge. So, that’s good, I suppose.

Oh, and I guess there was another killer called the Skinner. But seeing as how I didn’t remember him until I was researching this article, probably no one else did, either.

Overall: 7 bodies dumped in open graves out of 10

Season 4
Dexter and Rita are living the suburban life with their new kid (not to mention the other rugrats).
There’s a new bad guy in town, the Trinity Killer (played by a frighteningly sociopathic John Lithgow).
Special Agent Frank Lundy works with Debra (and they start a healthy relationship, which is weird for her). But they both get attacked by Trinity, or someone working for him.

Dexter figures out who Trinity is, and goes undercover to learn more about him. Turns out Trinity is a family man, who seems to have everything Dexter doesn’t. Dexter starts a friendship with Trinity (aka Arthur Mitchell). The picturesque Mitchell family is not what it seems, however, as Dexter discovers a history of family abuse.

Through some crazy shenanigans, Deb finds the shooter, Dexter pins the Trinity killings on someone else (so he can take out Trinity himself) and gets duped by Trinity, wherein he learns Dexter’s true identity as Miami Metro’s blood-splatter analyst.

John Lithgow is stellar as Trinity. One of the best performances of his career, I’d say.

After an exhausting game of cat and mouse, Dexter finally kills Trinity, but not without a tragic loss. One of the craziest season finales I’ve seen in a while (maybe except for Billith).

Overall: 10 femoral arteries out of 10

Season 5
After such a stunning season, I’d imagine it was hard for the folks at Dexter to come up with a story to top Trinity. But they didn’t try. Instead they made a season about Dexter’s loss and redemption, which I thought worked more than it didn’t. It was an odd season, and I know it polarized a lot of viewers, but I enjoyed it for what it was.

Dexter inadvertently saves a girl (Lumen, played by Julia Stiles) when he’s on the trail of a group of serial rapists/murderers (whose ringleader is played by Johnny Lee Miller). 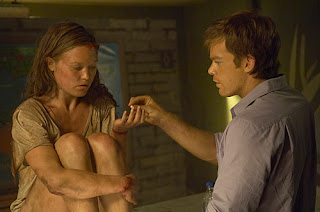 This happens after the police question him about the horrible murder that capped off last season. He helps Lumen take revenge on the group of rapists who tortured her. Part of it seemed ridiculous, but I understood Dexter’s desire to save Lumen.

Detective Quinn takes on the Doakes role for this season, wondering if Dexter had something to do with Trinity’s disappearance. And he enlists a crooked Robocop—okay, Peter Weller—to look into Dexter’s history. And Quinn and Debra are dating. So yeah.

Dexter once again evades the law, no one finds out his secrets, and having killed the rapists, Lumen leaves.

Overall: 7 Sick Boy tongues out of 10

Season 6
You knew the creative stride couldn’t last. This season had the makings to be great. A new storyline, awesome guest stars (Edward James Olmos, Colin Hanks) and an intriguing religion-themed killer.

But then I actually watched it. Did anyone give two shits about anything that happened this season?


Colin Hanks’ character chews up the scenery like bubblegum, and I loved it.

Quinn fucks a woman involved in the murder investigation after Deb refuses his proposal. Oh, Deb. Can we talk about Deb? Let’s see, in this season alone she becomes police captain, refuses a marriage proposal, goes to therapy where she has a revelation: she’s in love with her brother! And this plays out awkwardly through the whole season. The scenes of her flirting with Dexter were so cringe-inducing I had to look away.

So, EJO and Colin Hanks go around committing apocalypse themed murders. That’s about it. Dexter and Miami Metro figure things out much slower than usual. Dexter kills Colin Hanks and Debra witnesses it. Talk about awkward. That final scene was the one saving grace of the entire season.

Oh god, I almost forgot about Dexter’s face on a painting! I’d devote an entire article about that if I didn’t think it would kill me inside.
Overall: 3 vomit-inducing mental images of Deb and Dexter fucking out of 10

Season 7
I had fully intended to stop watching Dexter this year. I really disliked everything that happened last season. But then I thought why not watch the new season, savage every episode and write about it for the UC? And if this season happens to be really good (cue laugh track), then it will be less painful for me. Because that's what I do: I sit through ridiculous shows and write about them for your reading enjoyment.