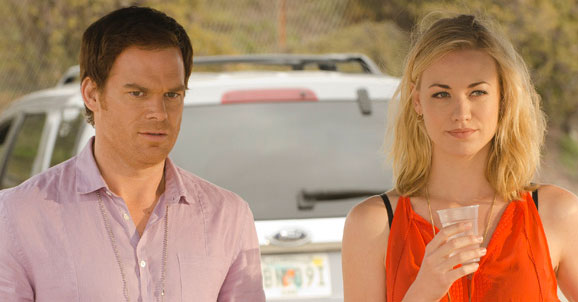 How about that hurricane? Hopefully all my fellow East-coasters are all safe and sound with plenty of candles, flashlights, books and lube.

On this installment of Dexter, they cover up a lot of shit, exhume some different shit, and things just don’t go the way that Dex had planned. Hate when that happens, amirite? Also, this one was a real annoyance to wright about. But I got through it, because I care about you.

Dexter’s at his boat, cleaning up for Harrison’s eventual return and having a chat with his ghost dad. Dexter is overconfident that Deb can handle all the baggage he’s dropped on her. Ghost dad is not so sure.

As Dexter cleans, he finds some blood. Curious, Dex thinks, I haven’t killed anyone recently. He gets all CSI and takes a sample. (We all know it’s Lewis, though.)

At Miami Metro, Matsuka is freaking out about LaGuerta sending evidence—in this case, it’s the blood side from the church—out to a private facility. Deb is also concerned, seeing as how she helped Dexter cover up that crime scene. LaGuerta tells Deb she’s having reservations about Doakes and the whole Bay Harbor Butcher case. The blood slide trophies weren’t made public knowledge, so the BHB is still out there. Deb agrees to help her by interviewing possible BHB victim family members.

Elsewhere, Dex finds out the blood is Lewis’. Deb comes in and lets Dex know they are both in a “storm of fuck.” Hurricane Sandy, anyone? These are the jokes, people.

Dex is not happy about Deb keeping tabs on LaGuerta. He does point out his victims on the list. But only one family is in the Miami area. The killer in question was a wedding photographer named Barnes, and Dex snagged him at a reception. Deb has a mini freakout; what if someone had taken his picture there? Dex pats her on the head and says “keep the hard thinking to the men, sugartits.” Essentially.

After work, Dex swings by the house, only to find something out of place. He decides to not go in, and it’s a good thing because Isaak is there waiting.
Dex lures him to a restaurant and calls him from across the street. They do some verbal posturing until Isaak threatens all of Miami Metro, especially Lt Debra Morgan.

Deb meets Dex in the MM parking garage later, and he spills it all: he killed Viktor, tampered with evidence, covered it all up. Deb is more pissed that he messed with a case than she is concerned with him killing Viktor. It’s clear that the weight of all Dex’s matching luggage is suffocating Deb. She doesn’t even know if he’s telling the truth anymore. But she’s fine laying low in a hotel for the night.

Dex stalks Isaak later that day, but gets a call from Angel; Hannah is ready to take them to the missing bodies. Apparently there is a missing week in Wayne and Hannah’s Natural Born Killers road trip. They spent a week in Miami, killing people for their hotel rooms. Hannah gives a sob story about digging graves, but Dexter notices her nostalgic demeanor. He’s also intimidated by her, I think.

That night, Deb and Dex hang out in a hotel room and reminisce about playing in the sand at Myrtle Beach. “You were my hero,” Deb says as all of America barfs simultaneously.

The next day, Dex, Angel and Hannah go to one of the murder sites. As they wait, Dex and Hannah talk about blood and gore and crime scenes. You know, silly stuff. Soon enough the dogs find some dead bodies—a surprisingly well-preserved man and woman wrapped in a shower curtain. Dex goes into crime scene mode and breaks it down.
The man was stabbed to death, most likely by Wayne. The woman tells a different story; Hannah is the most probable culprit, but Dex keeps quiet about it. He waits until the two of them are alone to confront her. Turns out Hannah made a deal for immunity to any crimes committed while she was with Wayne. So even if she did kill that woman (and she totally did), it doesn’t matter.

Meanwhile Deb is off doing those BHB interviews, and who should happen by but LaGuerta. She got done early or some such nonsense and joins Deb on her interview of Barnes’ family. They meet Barnes’ super-cute son (he’s age-appropriate, by the fucking way) and he tells them how much better his life has been without his dad around. The son also gives them a box of photos from the reception in question. Deb notices Dexter in one of the photos and volunteers to take the pictures back for further review.

Did we even need LaGuerta in that scene at all? All she provided was unnecessary tension in a scene that would have been just as tense has she not been there.

As Dexter leaves the crime scene, he notices Isaak tailing him. But Dex is fine with it. He leads Isaak to the wrong part of town, specifically a bar frequented by the Colombian mob. Dex ducks out a window and Isaak comes swaggering in, gun in hand. Dex hears gunshots from inside as he drives away, assuming the Colombians have dispatched Isaak for him. Oh Dex, you know what happens when you assume, right?

Deb has just enough time to pocket the incriminating photo before the gang at MM is called to a shootout in a Colombian bar. Now where did I hear about that before?

In news that will surprise no one, Isaak killed everyone in the bar and escaped. Dexter goes through the scene and marvels at Isaak’s skill at killing. They find some of his blood at the scene, though. So that’s something.

Over at the Foxhole, Quinn drops Nadja off for her shift, and Isaak and Foxhole manager take note that Quinn used to be a crooked cop. As Quinn gets in his car, he finds a bag of cash. As far as we know, Quinn takes the money. I know I was hoping for a bomb under his seat, too, but to no avail.

Later that day, Isaak get arrested. And Angel still has a hard-on for his bartender framejob theory. But Deb tells him to drop it, even though we all know he won’t.

Dexter visits Isaak in prison and Dex is pretty stoked that Isaak can’t get to him now. Everything is fine now, right? Wrong! Isaak tells Dex a story about his grandpa’s long quest for revenge. So yeah, it’s not over.
That night, Deb stops by Dex’s place to give him the incriminating photo. He’s pissed until he realizes that she just saved your ass you moron. But as far as Deb is concerned, she is done with it; she doesn’t want to keep covering for him and knowing what he does. (A bit late for that, I’d wager.) When she says LaGuerta won’t stop looking into the BHB case, Dex flippantly says that if FBI Special Agent Lundy couldn’t figure it out, then neither will LaGuerta. Oh, Dex, please stop underestimating everyone that’s not you.

Deb asks him about the Hannah and Wayne’s crime scene and he lies. Nothing special to note. And then they reminisce some more about Myrtle Beach.

Also, Dex dives deep, while Deb is safest on the shore. Yawn. There’s the title explained for you.

Not my favorite installment this season. It’s wasn’t particularly bad, but it felt a little boring to me. It will be interesting to see how Hannah and Isaak will play a role in upcoming episodes, but until that happens I bid you adooooooo.