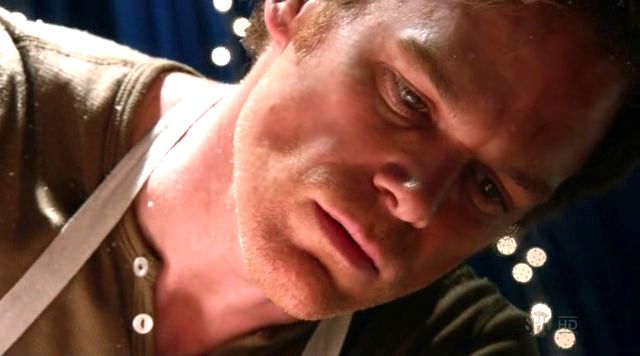 Episode 6: Do the Wrong Thing

Anyhoo, this week Dexter starts feeling all funny about a certain blonde lady, Deb has lustful thoughts about a true crime author, and Quinn dry humps a bag of money. Oh, and there’s some stuff about crimes and covering up said crimes, too. (I also totally phoned in the pics for this recap. I have a cold, and that's my excuse.)

We start the episode with Dexter stalking Hannah. He’s convinced himself that she’s a murderer. Ghost dad shows up to be the voice of reason, pointing out that he has no actual proof. He does this while Dex pretends to read and stares at Hannah as she crouches down in slo mo.
At Miami Metro, Deb and LaGuerta debrief everyone about Isaak; they have a solid case, so don’t do anything like destroy evidence (foreshadowing!). Dexter figures he’ll give Hannah a “peace offering” since he accused her of murder last episode. He decides to fudge the blood evidence on the newly exhumed corpses. I feel like Dexter is mistaking his lust for killing for another kind of lust.

Meanwhile, on Prison Break, Isaak torments the Colombian prisoners and calls George (formerly Foxhole Manager) on his...cell phone? Something tells me he’s not supposed to have one of those in prison.

Over on Dexter Stalking Hannah, Dexter stalks Hannah, who is—you guessed it—crouching. They talk about poisoning rabbits, Dexter flirts and talks about his dead wife and she about her dead husband and her former mentor, Beverly (also dead), who may or may not have been murdered by her. And then she gives him an orchid. No, that’s not a euphemism. I feel like orchids are expensive? So she has a great business model.

Later at Miami Metro, we’re introduced to Sal Price, author of Wayne Randall’s story. He’s looking over the old and new case files for an update to the book. He also asks Deb out but she shoots him the fuck down. As we all know Deb has a fantastic track record with men (one was a serial killer, one was a former criminal, one was a great guy that got murdered, and one was, well, Quinn).

Dexter gets info on Beverly's death, and it turns out it was under mysterious circumstances. Imagine that! Dex leaves work and breaks into Sal’s house and steals some info on Hannah.

Quinn, meanwhile, gives back the money George (aka the Russian mob) gave him last episode. This in turn makes George and Isaak very angry. Angry enough to make George take Quinn out to dinner. Not really, but he does threaten to send Nadja to a sex farm if Quinn doesn’t destroy the evidence. Long story short: he totally destroys the evidence. And while we’re on the subject, are there no cameras in the evidence locker?

Did you wonder what Angel and Jamie were up to? Me neither, but we get an obligatory scene with them having lunch and Angel ponders retiring and buying a restaurant. Also, two things about this scene: 1) Jamie eats like she’s never held a knife and fork before and 2) How did I not know Angel and Jamie were brother and sister? I thought Jamie was his illegitimate daughter (that would make more sense, anyway...)

That evening (I think) LaGuerta tells Deb about her ongoing investigation into the Bay Harbor Butcher (BHB). Turns out those interviews she did last episode went nowhere. But that’s only led her to search other cases. The “barrel girls” murderers (that’s season 5 for those of you paying attention) seem like a likely candidate for the BHB. Deb does her best to dissuade LaGuerta.

Oh shit, Hannah’s here! She googled Dexter and shows up with another orchid, only this one has “blood spatters” on it. She traipses around his home, and puts the plant on his bedroom dresser. They have some uncomfortable sexy flower talk until Deb calls mercifully. And for those of you playing along, Hannah has now given Dexter two expensive-looking orchids.

Dexter eventually meet Deb at her place, and she is all fired up about this new development in LaGuerta’s theory. Dab asks him about the barrel girls and puts all of season five together in her head: Lumen, her staying at Dexter’s old house, the mysteriously disappeared murderers (lest we forget, Deb let Dex and Lumen go at the end of that season). Dex tries to assure her that they’ll never find Lumen and that she wouldn’t talk, even if they did. Deb is 50 shades of unconvinced, and Dex doesn’t get why.

On the next installment of Dexter Stalking Hannah, Dex has a brief convo with Hannah’s gardener, who tell Dex that Hannah and Beverly were very close, and that Hannah was the only one with access to her around the time of her demise. Later, Dex snoops around Hannah’s greenhouse (again, not a euphemism) and finds the aconite flower...and it’s been recently harvested.

Hannah returns and invites Dexter in for coffee. She confronts Dexter as to why he’s been stalking her. Thinking on his feet—and not drinking the probably poisoned coffee—Dexter asks to “take her out” on a date. At first, Hannah declines; she goes into this story about Wayne and her lack of control issues when it comes to dating—oh, and how she never got to see "Santa’s Holiday Adventure" (seriously, not making this up). But Dexter appeals to her bad side, and she says yes.

At Miami Metro, word is out that Angel might retire. Deb is overly concerned, but all their conversation serves is an opportunity for Deb to get up the nerve to ask Sal out on a date. They meet up at a trendy restaurant and Deb offers an interesting quid-pro-quot: she’ll make out with him if he tells her about his new book (dot dot dot) about Hannah. Deb asks to see his evidence, and he shows her the actual bloodwork on the recently exhumed bodies. Too bad they went and gave her that pesky immunity.

Dexter takes Hannah to "Santa’s Holiday Adventure"—the only place in Florida where one can see real snow, or somesuch. After holding hands and turning on the snow machine, Dex drugs Hannah and straps her down. After a few very tense moments, Dexter doesn’t kill her...he bangs her.
I think this episode was a huge climax for us viewers, who might be feeling a bit...pent up with all the non-death going on on a show about a serial killer. At least we got us some tasteful sideboob. Also, why does Michael C Hall never show his bare ass? Doe he have ass pimples? They can CGI that shit, you know.