The Knife to release new album in 2013 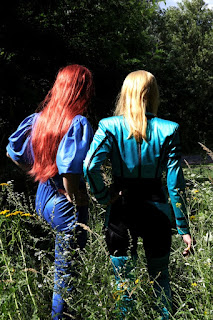 The wait is finally over, my friends. Enigmatic and totally awesome Swedish electronic music duo The Knife (siblings Karin Dreijer Andersson and Olof Dreijer) announced this week that their next album, titled Shaking the Habitual, will be released on April 8, 2013. It's been six years since the critically lauded and highly influential Silent Shout, and almost four years since Karin's equally haunting solo album under the pseudonym Fever Ray. Sure, they collabored with Mt. Sims and Planningtorock (aka the poor man's Fever Ray) to release the Darwin-inspired electro-opera Tomorrow, In a Year in 2010, but it's far from a proper follow-up. Additionally, the duo will tour Europe next year on yet-to-be-announced dates.

Earlier this week, the duo posted a typically mysterious teaser trailer for the album, which contains the following description: "Music can be so meaningless. We had to find lust. We asked our friends and lovers to help us."


I loved dem shoes. Ugh, this is all so exciting, I simply cannot wait!!

Here's one of my personal favorites from Silent Shout, "Neverland". For some reason, this song really speaks to me.