But Seriously: Buy a book, and help Peter David! 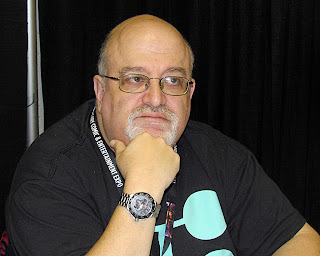 So, one of my favorite writers, Peter David, recently suffered a stroke. I had the chance to chat with him at the 2012 New York Comicon, and he's one of the nicest people. Even before that, I saw him give a mini-presentation at a con in the Buffalo area waaaaay back in the day (mid 90s). He'd created the show Space Cases for Nickelodeon, and he did a slide show--with actual slides. Yes, kids, they were once a thing. Anyway, there were some issues with the projector, and my dad helped him fix it. Cool story, I know.

I guess what I'm trying to get at (way to bury the lead with your ramblings, Kurt) is that you can totally help him out by buying on of his books. He's quite the prolific author as well, so there's plenty to choose from. Check out his bio from Crazy 8 Press.

I'd suggest his "Pulling Up Stakes" two-parter. It's a bit of a send up of the recent surge in vampiric media with an irreverent sense of humor. The first part is also $1 on amazon. How can you say no to that?

He also writes X-Factor, a sort of super hero noir/comedy/drama mash-up. It's also one of the best comic book series of all time. That's right, I said it. Come at me. I will cut you.

Keep up to date by following Peter on twitter and his blog. And please buy one (or all) of his books!