A Review of "The Place Beyond the Pines"

April 27, 2013
I've never seen "Blue Valentine." I intend to see it, but I haven't gotten around to it yet. I am  still a rather large Ryan Gosling fan though. Let's be real: Who isn't?


So I saw "The Place Beyond the Pines" (directed by Derek Cianfrance who also directed "Blue Valentine") the other night starring Ryan Gosling, Bradley Cooper, Eva Mendes and Ray Liotta. Ray Liotta genuinely bothers me, but that's for another time. I bet he's a super-nice guy in real life.

Eva Mendes is dating Ry-Ry IRL and they make an adorable couple. Seriously. I wish they'd have kids. Do you think if I penned an anonymous letter to them, they'd procreate? ...

Bradley Cooper rounds out the bigger names (ah- I forgot Rose Byrne, a.k.a. the bitch from "Bridesmaids." She's actually a fine actress- very believable in her role). I kind of don't like him either? "Silver Linings Playbook" aside. I might like him better if he was boning Jennifer Lawrence to be honest. I know I know. I shouldn't be allowed to review things when I'm kind of in the mood, I know.

First of all, it's brilliantly shot. Each scene is gorgeous and mesmerizing. Even the present-day scenes are like rehashing a surreal memory. The scenes from the 1990s (nearly 20 years ago) are fuzzier and more out-of-focus) but nonetheless, it's a tour de force of cinematography.

Gosling plays Luke Glanton, who is a stunt-rider for a travelling carnival. Our first view of his is kind of an angry one, with him angry, covered in ridiculous tattoos (RIDICULOUS) and throwing knives at a dartboard. He wears cut-off metal band t-shirts and Hanes t-shirts inside-out with the tag in the front. Basically he dresses like me when I was six.

Luke is white trash at its most honest and delectable. Isn't it funny how Hollywood sometimes glamorizes the "working man" yet society regularly teaches us to look down on Carnies and those of Luke's class?

Eva Mendes is Ro, the girl he had a fling with last time the carnival came through Schenectady, New York. She sees him at his performance and they briefly talk. He goes to her diner, later that night. This is the siren's call, friends. Our anti-hero now faces deep shit.

See, Ro has been keeping a son from him. A SON. Luke finds out and flips out. He decides to quit the carnival and be with his kid. Except Ro has moved on- with good reason, too. She's now dating a kind of well-to-do guy, Kofi.

So, what does Luke do? With the urging of his gross friend who takes him and looks like a recovering methhead, he turns to armed bank-robbing. Something we all do at some point. That or prostitution.


His goal is to get enough money to be a good provider and take care of his son, and Ro- who won't leave Kofi. It's sweet, but. Each action has a reaction.

Luke loses focus. Oddly, so does the movie.

Enter Avery Cross, placed by a trimmed Bradley Cooper. Avery is a law-school graduate turned cop with a sense of virtues and morals that would make King Arthur weep. During a police chase, guess what? He kills Luke. Luke shoots him in the leg, but it doesn't matter because in seconds Ryan is a bloody mess (spoiler alert).

Then, Avery is the focal point. He realizes how corrupted his police department is as he plays the role of the "hero" cop, something he is not entirely comfortable with. Ray Liotta is a corrupt cop. SHOCKER.

Avery eventually blackmails the other cops in his department and becomes assistant district attorney.

This is when I lost interest. Because Avery and Luke both had infant sons in the late '90s and now they are...TEENAGERS IN 2012. Oh blah blah blah.

Avery is running for attorney general of New York and Luke remains dead. Their sons, however are now the focus. Which is great. Avery has since divorced his wife, Rose Byrne and his son has become a member of "Jersey Shore." I'm not even kidding. He's a guido through and through. Bradley Cooper gave birth to a GUIDO. 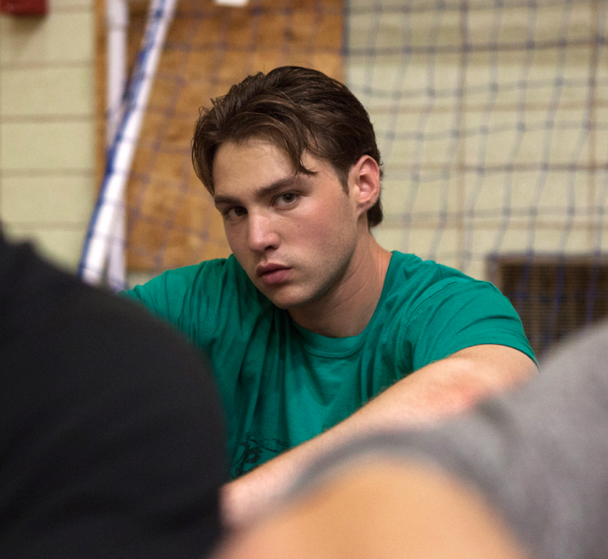 Then, there is Ryan Gosling's son, who has become Leonard DiCaprio in "The Basketball Diaries." I like how he's half Latino yet looks very white.

There is a lot of father-son angsting here. Luke's son, Jason, has no idea his father's morbid history. When he discovers it, OH NO. And Jason is just as troubled as his dad. AJ, Avery's son, is a rebel who like drugs and rap music.

I won't spoil anymore for you, reader, but the ending is weak and Ro, Eva Mendes' character, is totally one-dimensional in the second part. Add to that Bradley Cooper becomes a dick. Which is a shame, because he had a "heart of gold" in the first part. See? Power and greed corrupt. Very Shakespearean.

"The Place Beyond the Pines" is enjoyable and well-done up until the second half. Honestly, neither son is interesting enough to have that much limelight devoted to him. Perhaps with different actors- or better writing- it wouldn't have been so bad.