Game of Thrones: A Spider Among Golden Roses 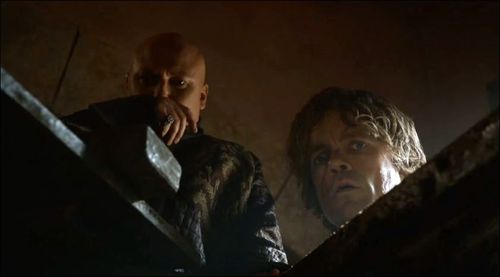 Episode 4
And Now His Watch Is Ended

Jamie and Brienne—They are still captives of Lord Bolton’s men. But at least Jamie has a new necklace. The necklace is his severed hand. And he’s not looking so well. He tumbles off his horse.

He falls into the mud, pleading for water. One soldier pours some over his head. But their commander, Locke, decides to be benevolent and gives Jamie some water. Joke's on you, Jamie! It’s really horse piss.

Somehow Jamie gets hold of a sword. Seeing him try to fight using his off-hand is pathetic. The soldiers toy with him until Locke beats him back into the mud. “Do that again, and I’ll take your other hand.” Hindsight is a real bitch, ain’t Jamie?

They make camp later, and Brienne notices Jamie won’t eat. He mumbles something about being useless without his sword hand. Brienne tells it like it is, calling him a coward. Now that he’s had a taste of the real world, he’s turned into a whiny little bitch baby who wants his blankie and pacifier (I’m paraphrasing). 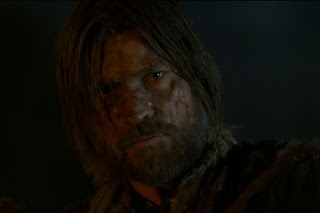 He manages to eat some bread, emboldened by Brienne calling him a woman. She also notes that he helped her avoid being raped by spinning a story about Tarth, “The Sapphire Isles.” Turns out, it’s not full of sapphires like Jamie told Locke, it’s the blue of its ocean water that gave it that signifier. Why would Jamie go out of his way to help her? Brienne is left wondering.

King’s Landing—Tyrion goes to Varys for help in finding proof that Cersei ordered a hit on him (last season, during the Battle of Blackwatch). No such luck to be had there. Varys is more concerned in opening a large crate and telling Tyrion the story of how he lost his man-bits. 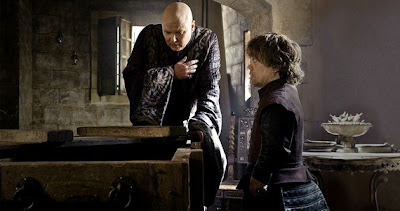 We heard much of this story in an earlier season. Short version: he was sold to a nasty sorcerer who used Varys’ junk as a sacrifice to a fire god, and the fire god answered the sorcerer. And guess what’s in the crate? That very same sorcerer.

I’m not sure what this has to do with anything else this season. It seems like an out of place scene, if only to tell the audience “Oh, hey, Varys is in this episode a lot. Let’s catch everyone up on who he is.”

For example, later Varys and Ros have a little rendezvous, and chat about Littlefinger and Sansa. Oh, and how great Pod is in bed.
But Varys thinks Littlefinger has no interest in Sansa, until Ros hands him the ship manifest for his trip to the Eyrie (remember, he’s going to wed crazy, boob-bearing Lisa). Why would he need two feather beds? Cause he’s not taking Ros—or any of his other girls—with him.

Meanwhile, Joffrey shows Margaery around the massive chapel/tomb/sept/whatever. He tells her stories of the Targaryen rulers, and she’s positively enthralled.
Cersei and Olenna walk ahead of them. They talk of Robert’s death, as well as Renly’s. Olenna thinks that it’s ridiculous that men are the leaders. And Cersei wants to agree so badly. Instead she just smiles and nods.

Marg urges Joffrey out the doors when she hears a crowd of people outside. “They adore you,” she gushes. They stand outside and wave to the throng of people. They seem to be calling out Marg’s name more than Joff’s, but he’s too busy being manipulated to worry. Cersei notices, because of course she does.

So much so, in fact, that Cersei takes her concerns to her father, Tywin. He’s busy writing letters. She first asks him about Jamie, and he mollifies her (“We’re doing everything we can...yadda yadda”). She also wonders aloud why he never puts his confidence and trust in her, who has always listened to his advice; at times, she’s the “only one listening.”

He gives her the chance. She voices her concerns over the Tyrells. Especially Margaery and her manipulations of Joffrey. Tywin essentially tells her to leave the hard thinking to the men. He has everything under control. Now go make me a pie.

Elsewhere, Olenna sits in the gardens, being as snarky and biting and wonderful as ever. She hates the Tyrell rose, and their house motto “growing strong.” And she’s right, it’s no “winter is coming,” no direwolf or dragon or kraken. 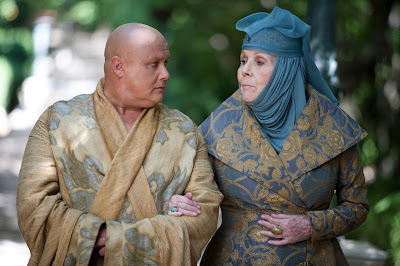 Varys comes to pay her a visit. And he has met—if not his match, then certainly his equal, in Olenna. She’s got wits for days (seriously, I feel bad for you if you’re not watching Diana Rigg on this show). He’s come to her about Sansa; he realizes she is the key to the North if Robb Stark should lose this war, and Littlefinger knows this. He’d rather have her in the court of the Tyrells.

Cue Margaery, who finds Sansa praying at King’s Landing’s godswood (at least I think that’s where it is). She walks with Sansa, talking about prayers. Turns out Marg makes boring prayers, because she cursed one of her beautiful cousins. Not really, though, she was just having a go at gullible Sansa. She does make Sansa wet with desire when she mentions Highgarden and marrying her off to Loras.
Sam—Past the Wall, Sam, Mormont and the rest of the Night’s Watch are still at Craster’s. But now he’s put the men to work (“Like the sons he never had,” one of them says.). And there is talk of mutiny brewing.

Sam checks in on Gilly and her newborn son (which will be put out for the White Walkers, remember). But unless he wants to help her—and her son—escape this place, she doesn’t want him around. Fair enough.

The men later put one of their own to rest on a funeral pyre. He died of a broken foot, and malnourishment. Again, the men talk of killing Craster and taking his food. Mormont is quick to quell them, but it’s on their faces; they’re hungry and tired and angry.

Inside, Craster is as wonderful as ever. If they’re hungry, just cut their throats. They won’t be hungry after that. The men complain about food, and Craster tells them if bread isn’t enough, go out and eat snow.

This tends to not go over well. One of the men calls Craster a bastard, and to him those are fighting words. He gives the men a chance to shut up and let it lie, but the one crow (Owen from Torchwood) calls him a bastard once more, and mutiny ensues. Owen puts a knife through Craster’s head, and Mormont is murdered by Rast. 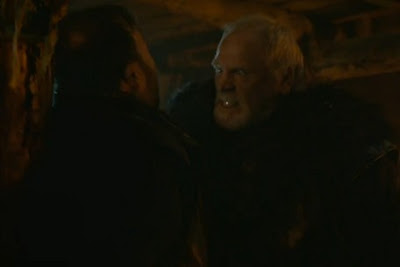 Amid the chaos, Sam grabs Gilly and runs, with Rast calling after them.

Theon—He and the spy venture away from the castle, and Theon tells him about Winterfell, the orphan boys (that served as Bran and Rickon’s bodies), how Ned Stark was his “real” father. They sneak through a tunnel and into a dark room...and we’re back where we started. It was all a ruse. So we’re back to that status quo.
Bran—He has a brief dream sequence with Jojen. Bran climbs a tree to catch that elusive three-eyed raven. He gets to the top of the tree, but Catelyn is up there, yelling at him to stop climbing. Bran wakes in a cold sweat with Jojen watching over him.

Arya—She and Gendry (and the Hound) are taken to a secluded cavern, the Brotherhood’s hideout. There we meet one-eyed Beric Dondarrion, a former soldier in Ned Stark’s army, and the leader of the Brotherhood Without Banners. 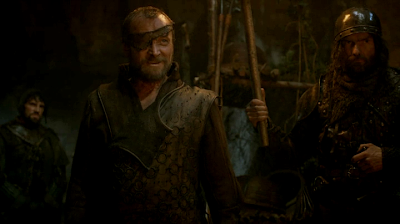 He talks to the Hound about his crimes, mostly murder. The Hound says he was always following orders. Arya mentions the butcher’s boy (from season one), who was an innocent. Beric doesn’t like what he hears, and offers the Hound a trial by combat.

Daenerys—At Slaver’s Bay, Dany walks among her 8,000 troops, a small carriage carrying her dragon follows close behind. The slaver offers his advice; there are many small towns to lay siege to along her way to Westeros. 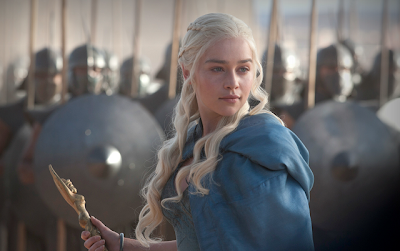 Dany presents her dragon to him, with a chain around its leg. She trades it for an ornate whip; the Unsullied are now hers to command. She turns to them as the slaver struggles to control the unruly dragon.

She orders them to kill all the slavers and soldiers, and to free every slave in the city. The slaver realizes she can speak his language—which is her mother tongue. Oh, how the slaver burns. He burns real good. As does the rest of the city.

After the massacre, she frees her Unsullied army, and offers them the option to join her freely. And they all do. Dany and her army leave the city, with her dragons flying high over it all.
Guys! Next week's episode is called "Kissed By Fire!" It had better mean what I think it means. Specifically, some fire-kissed Jon Snow sexing.