A Review of The Great Gatsby Soundtrack: Play By Play

May 11, 2013
"The Great Gatsby" came out yesterday, which marks a moment I've waited for most of my life. 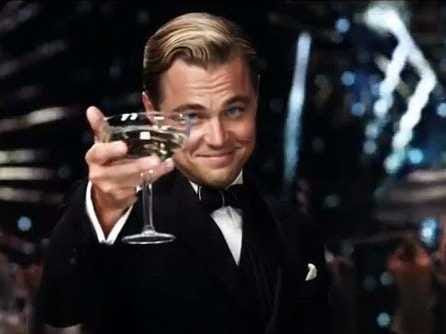 I understand reviews have been mixed and Baz Luhrmann is a little goofy, but I don't care. This is worth it.

I'll probably see it this weekend and then I'll likely post a shapeless review of sorts as per normal. Right now though, some jerk woke me up and I feel bleak so Ima review the soundtrack, SONG BY SONG. You're all such lucky people!

Baz Luhrmann films, if not known for camp and being over the top, are known for their soundtracks. "Romeo + Juliet," "Moulin Rouge." The Jay-Z curated "Gatsby" soundtrack is no different. It's a stream of hits...and some misses.

Here are my thoughts. Please note it's almost 4 A.M. in Phoenix. No, I'm not drunk. I was asleep until 1:15-ish when some frat goons came running by my apartment, gabbing. Assholes.

"100$ Bill" - Jay-Z: I like this track a whole lot, but why call out Taylor Swift, Jigga? You're massive and in a different sphere. It's like me going after an Olsen Twin. Okay, not quite the same, but.. Grade: A

"Bang Bang"- will.i.am: Why do I cringe typing out his name? Actually this is a good song. Nice Louis Armstrong homage. But it's also will.i.am. so one must take what one must can get. WILL.I.AM. Grade: B+

"A Little Party Never Hurt Nobody (All We Got)"- Fergie, Q-Tip, Goon Rock: Fergie's vocals are as impressive as ever, but I skip this song. Gleefully. Grade: C

"Young and Beautiful"- Lana Del Rey: You know how I love Lana. I can't hide it. This, though, feels a little uninspired. It's pretty and vulnerable, which gives it that something extra. I think - should it be played in the actual movie - it would be gorgeous. Benefit of the doubt. Grade: A-

Half-asleep note: I'm glad she addresses wanting to bring your other half to Heaven with you. But the line "makes me want to party..." Jesus

"Love Is the Drug"- Bryan Ferry: Guess what? This is the first time I've listened to Bryan Ferry. LOVE. It definitely has a 1920s soul/vibrancy, too. Grade: A

"Over the Love"- Florence + the Machine: Awesome, traditional Florence fare. It pulsates; it's powerful. It's her vein of Baroque pop as we know it but it's nonetheless invigorating. Grade: A

"Love Is Blindness"- Jack White: This U2 cover makes the album for me. It's tortured, hot, borderline obsessive. It's Gatsby's devotion to Daisy channeled by Jack White, who is a rock god. Grade: A+

"Where the Wind Blows"- Coco O.: She does a commendable job of fitting in with the 1920s motif, and putting it through some kind of R & B funnel. She's impressive. Grade: A-

"Crazy in Love"- Emelie Sande and the Bryan Ferry Orchestra: So meta having a Beyonce cover on an album Beyonce is actually on. This song is a brilliant cover. I mean that- earnestly brilliant. Not Stephen Hawking brilliant, though! Grade: A+

"Together"- The Xx: Every Xx song seems to sound the same, but it's still, god, the only word that comes to mind is "hot." I recently read a Rolling Stone recap of their first album, which they essentially called "hipster booty call music." True dat. Also, again- the anguished romantic aspect. Grade: A

"Into the Past"- Nero: I can't get this song on Spotify and haven't heard it elsewhere. I can say Nero was a bad emperor. I think my least favorite TBH. Grade: BAD EMPEROR

"Kill and Run"- Sia: What prevents me from being a bigger Sia fan is how boring she can be. I like her- she seems like a sweetie, but. Yeah. Anyway, this is an EXCELLENT close. Sia, of all people, brings it home. Grade: A

Overall I give this album a 93/100. What kills it for me is Goon Rock. I hope the film is just as good...although I fret. At least it will be better than that drab Robert Redford version. I've had more fun staring at wallpaper than watching that movie. End thought.