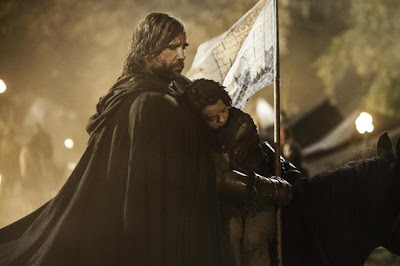 Arya—She and the Hound escape from the Twins, but not before they witness the “King of the North” (Robb’s body with his direwolf’s head attached. Pretty gross.) They come upon a group of Frey soldiers laughing about the Red Wedding. Arya gets mad and kills one of them and the Hound deals with the rest. 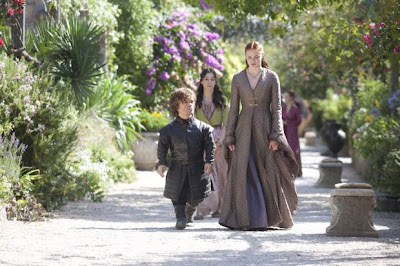 King’s Landing—Tyrion and Sansa seem to be getting along better now. They joke about getting revenge on people laughing at them.
Tyrion is called into a Small Council meeting, where Joffrey beams over the death of Robb and Catelyn. Oh, and in case anyone forgot, Joffrey is still an enormous douchebag. After throwing a tantrum, Joff is sent to his room, and Tywin has a talk with Tyrion.

He lets slip that he was involved in the Red Wedding, giving assurances to the Freys. Oh, and when are you going to rape Sansa and get her preggers? (I’m paraphrasing Tywin’s elegant suggestion.) Tywin also guilts Tyrion by telling him he was the one that spared his life when he was born.

After that awesome conversation, Tyrion drops in on Sansa, who has already heard the news about her family.

Then there’s a scene where Varys bribes Shae to leave King’s Landing, citing that she is more of a distraction to Tyrion than anything else. She refuses because Shae.

Later, Tyrion drinks with Pod, but they’re interrupted by Cersei. She informs him that she will not marry Loras. Oh, and getting Sansa pregnant will make her happy. They chat about how Joffrey was such a nice baby.

Jamie and Brienne—These two are given a short scene, where they both make it to King’s Landing safe and sound. Well, aside from the mutilation and bear-fighting. Jamie also pays Cersei a visit. That’s it, she just looks at him. No bizarre reunion sex for them (at least not this season).
Bran, Sam & Jon Snow—Bran and his—now smaller—group take refuge in the long-abandoned Nightfort. Hodor notices a very deep well, and Bran tells them a ghost story of the Rat Cook. Seems the cook made the king a pie made of the king’s son. And the gods cursed the cook by changing him into a rat who could only eat his own children. He wasn’t punished for murder, Bran informs Meera and Jojan, he was punished for harming a guest in his house. (Am I mangling that story? My bad if I did.) It has a certain relevance/foreshadowing charm to it, don’t ya think?

Later that night, they hear someone coming up from the well. A cloaked figure emerges, and Meera tackles it. Turns out it’s just Sam, with Gilly close behind.

Reluctantly, Sam shows Bran and the gang the secret tunnel entrance, and they continue their trek north. He wishes Bran wouldn’t go, but he has concerns of his own.

Sam and Gilly make their way to Castle Black (finally!). Blind Maester Aemon is troubled by Gilly and her child, which she wants to name Sam. Book side note/rant: In the book, Gilly refuses to name the child until he’s two. It’s tradition. Oh well.

Aemon is even more troubled of the news of Wildings and White Walkers approaching the Wall. He has send out a message to as many kingdoms as he can.

Elsewhere, Jon stops on his journey to Castle Black at a small pond. Ygritte finds him, bow drawn. Jon calls her bluff that she won’t shoot him; he loves her after all. Guess what? Not only does she shoot him, she shoots him three fucking times. 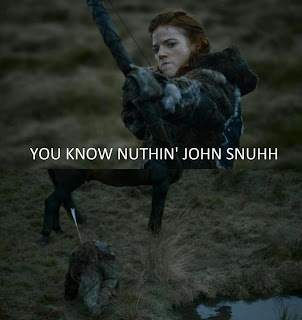 Once in the shoulder, once in the leg, and another in the arm. Can’t say you didn’t see that coming, Jon. Or that you didn’t deserve it.

He struggles, but finally makes it to Castle Black. He’s quickly taken inside to have his wounds treated.

Theon—In the latest installment of “What am I watching and why is this happening?” Theon is still in the torture chamber, only he’s minus his wang. Ramsay Snow eats a rather large sausage in front of him. 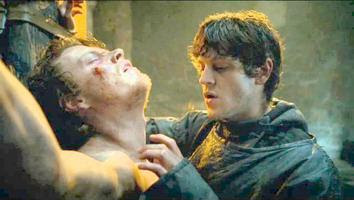 When Theon pleads for death, Ramsay gets up real close and tells him they have plans for the dickless wonder. Oh,and now his name is “Reek” not Theon Greyjoy.

Meanwhile, in the Iron Islands, Theon’s father, Balon, and sister, Yara, receive a ransom note of sorts and Theon’s manhood in a chest. Balon couldn’t care less, but Yara is steadfast in bringing her brother home.
Daenerys—She stands outside the main gate into Yunkai with her entourage, waiting to see what kind of greeting she should expect. A liberator? A conqueror? An enemy?

The freed slaves flood out of the gate en masse. After a while they start chanting “Mhysa! Mhysa!” which Missandei informs Dany means “mother.” As her dragons take flight, Dany wades into the crowd, who pick her up and worship her.

Davos—Feeling that killing a boy for a blood magic ritual is in bad taste, he helps Gendry escape. The scene with the two of them with the boat is pretty cute, actually. 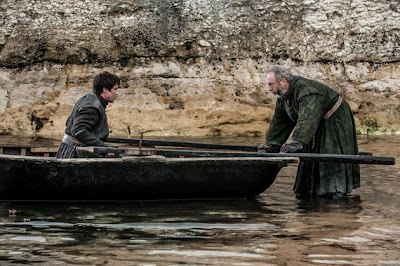 Davos probably is feeling some major pangs of guilt about his own son, who died on the Blackwater and was around Gendry’s age.

Later, Davos reads correspondence with Shireen (Stannis’ daughter) and finds a troubling letter. A letter with a seal from the Night’s Watch.

Stannis finds out about the escape, and he’s ready to execute Davos, when he shows him the letter. Both Davos and Melisandre agree that now is the time to journey north.
Okay, let’s talk about this finale. It did not have the impact I was hoping. Especially after the insanity that was last episode. The season seemed to wrap on a dull note. It was more like they needed to make sure they had plans in motion for the 4th season. Which is fine, but man, was that boring or what? Hate to say it, but they should have had the Red Wedding as the finale (it wouldn’t have been that hard to rework some scenes for this episode), even though that would have been a hell of a way to end a season.

Overall, I thought this season was good. It just seems like there was clearly better writing for some characters/storylines (Margaery, Olenna, Jon Snow, Jamie, Brienne) and less so for others (Bran, Sam, even Dany to a certain extent). It saddened me to watch some sub par stories play out after loving them so much in the novel.

Expect a whole slew of new characters next season, and of course a death or two, some of which might not actually leave you in a vegetative state for weeks! Again, if you’re still feeling the sting from this season, take the hiatus to relax, recuperate, and by next April, you’ll be refreshed and ready for more masochistic entertainment.

On a completely unrelated note motherfucking TRUE BLOOD is back next Sunday. So I’ll see you this time next week!